It is not what it may seem 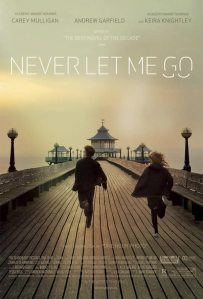 The story of “Never let me go” is far removed from the romantic drama its title promises. Hinting at restrained passions and hidden secrets in a disturbing boarding school, its trailer leaves us longing for the unleashed feelings of a never-ending love triangle. However, despite featuring three young adults intimately attached by unforgettable childhood memories, this actually is a science fiction movie about human clones fed by a society that will harvest their vital organs. The producers may have understood the risk of clearly stating this in the trailer and wisely decided not to.

Clones and their acquaintances are played by a talented and well-cast group of actors. The children playing the feminine heroines back in their childhood, so similar to their adult characters’ features and expressions, are indeed a smart choice. The cinematography by Adam Kimmel is also a success, appropriately recreating a dreary atmosphere. In general, the film benefits from a great technical execution, only blurred by an omnipresent and tedious soundtrack. Probably composed aiming to remind the audience of the characters’ fatal fate, it stops being thrilling when abused in every scene, generating instead an annoying tension.

Good acting and beautiful shots nonetheless cannot compensate for the lack of a strong and credible storyline. Both the sci-fi plot and the love story fail. The fact that none of the characters question this authoritarian system or try to escape from it when their own life is at stake, makes it even weaker. Just picture Orwell’s Animal Farm with no resistance or opposition to the pigs’ abusive command. On the other hand, the tumultuous triangle could have also felt more passionate if we had ever believed that the two women were actually friends. Relationships between the three of them are so simply sketched that their love and friendship doesn’t feel that strong. For instance, Keira Knightley’s role is reduced to a pure villain, where a loving but harmful friend would have had more real substance.

There is indeed some drama in the eyes of Carey Mulligan and Andrew Garfield, but the dialogues are poor and the plot is full of holes. During one of the turning points in the story, Kathy asks Ruth ‘How did you find it?’ and she replies ‘It was difficult but I had enough time to think about it.’ Right, so, how did she find it? Why do they know it is true? Maybe those that read Ishiguro’s novel have the answers. The rest, please note that you may have to believe it blindly.